Gentleman Broncos and the Illusion of Popular Opinion 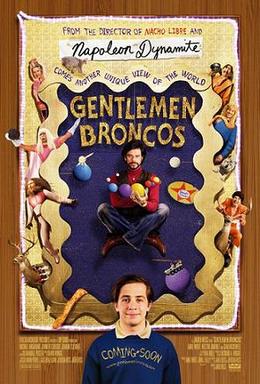 Gentleman Broncos was released in 2009. It was a gigantic flop at the box office and got thrashed by critics. The film was written by Husband and Wife filmmakers Jared and Jerusha Hess, who are best known for their film Napoleon Dynamite(2004). While that film become a cult classic and has engendered love within those who appreciate its quirky plot-less presentation, the subsequent films from the Hesses have not faired well. Nacho Libre (2006) their follow up to Napoleon Dynamite succeeded at the box office but received poor reviews. Then in 2009 came Gentleman Broncos, after the near 100 million box office of Nacho Libre Gentleman Broncos grossed a pitiful $118,192 at the box office. The critical reception reflected the opinion of audiences, with Rotten Tomatoes reporting in at 18%. The question then needs to be asked do these two markers of determine whether a film is good or bad?


Its hard to gauge just how good or bad a movie is from box office receipts, the history of film making is replete with great films that didn't make much money. On the opposite end there have also been films that have made hundreds of millions of dollars and yet been quite terrible and nigh unwatchable. The second determiner of success would be popular opinion, whether among critics or general audiences. Gentleman Broncos hasn't found success in either of those categories. General Audiences didn't connect like they had with the previous Hess films and Critics seemed baffled by the unusual humor. Overall Gentleman Broncos seems to be a failure.
Yet, after watching Gentleman Broncos this weekend I must say that I think that it was under appreciated. I'm not sure why some films with coherent stories get panned while others don't. I can't quite explain why some films that are strange and eccentric thrill critics and others seem to reap their unending hatred. I'm not even sure I know why I liked the film. Perhaps it is my love of Sci-Fi and Fantasy or my love for writing that contributed to my appreciation for this film, since the main plot of the film revolves around those topics. Or perhaps it is the quirky fantasy scenes featuring Sam Rockwell, with their weird dialogue and outrageous characters. Or perhaps even it was the central main character, whose name is unimportant, but who's place as an every man fighting against the sub-par situation around him. Regardless of the reasons I liked the film it remains clear that I am on the wrong side of popular opinion and the question then becomes is everyone else wrong or am I?
I can't really answer that question but I can say that the acting is funny, there are jokes that land, the cinematography and outrageous visuals are sometimes stunning to look at. The story is not poignant and yet it becomes an inspiration for those who pursue artistic endeavors. Overall I think its a film worth checking out.