Going Postal, Or How I Read a Satire of Bureaucracy and Government and Lived to Tell About It.

Going Postal, Or How I Read a Satire of Bureaucracy and Government and Lived to Tell About It.
By Daniel Shultz 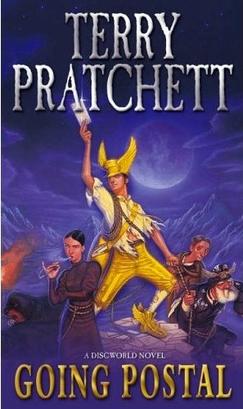 The late British author Sir Terry Pratchett was a very prolific author. For his most popular series, the discworld, Pratchett wrote 41 novels. From 1986 to 2007 Pratchett released at least a book a year. During this time he also worked on a few collaborative novels with other authors, including Stephen Baxter, and Neil Gaiman.  This prolific career as well as Pratchett’s knack for witty satire and silly humor has lead to Pratchett being considered by many to be one of the greatest authors Britain has produced.

Unfortunately the genre Pratchett wrote in, fantasy, keeps him under the radars of many who might enjoy his novels. Often fantasy novels keeps non-initiated readers away with their length and steep learning curve. For every universally accepted classic like the Chronicles of Narnia and The Lord of the Rings there are dozens of novels and series that languish unread or unconsidered by many readers.
Pratchett’s novels should offer a gateway to the fantasy genre. Each of the Discworld novels is a stand alone novel, often times introducing new characters and situations which require little knowledge of other books to enjoy. The humor and satire of Pratchett’s novels have as much to do with the real world as any satirical novel written by a literati snob.  The best example of this also happens to be Pratchett’s best novel.
Going Postal was Pratchett’s 33rd Discworld novel and was released in 2003. The book contains perhaps Pratchett’s most fascinating and compelling main character, Moist Von Lipwig. Moist, a professional criminal and con artist, is finally caught and sentenced to death in the city of Anhk-Morpork. After being “executed”, Moist finds himself very much alive and being forced by the locale’s Despot, Lord Havelock Vetinari, into running the Postal Service. The Postal Service is a decrepit and run down institution that is much ignored by the city’s population. In contrast a new invention, the clacks (a sort of telegraph, that uses towers to communicate between distances.), is a booming business that is making its unscrupulous owners a fortune.
Moist spends much of the novel trying to find a way to escape the clutches of Anhk-Morprok’s Dictator and the drudgery and terror of a Post Office that hasn’t delivered letters in decades. Much of the humor in the book comes from the pastiche and not-so-unbelievable representation of bureaucracy and government run amok, this clear satire runs up against the results of immoral business practices of the clacks owners and the crafty cons of Moist.
As the novel progress Moist finds that he is beginning to change into a person altogether different than the person he was before. Might it even be possible that a lifelong criminal might reform and change the money hemorrhaging Postal Service around?
The message of the novel is as timely as it has ever been, with governments in debt to the ceiling and no end in sight this book offers a glimpse into what a well ordered and constrained system can produce.


This novel offers a fantastic beginning for someone who is interested in reading fantasy books, reading Pratchett or just reading a good novel. If you haven’t read this book do yourself a favor and go and pick it up, you won’t be disappointed.
Posted by flyfoxpro at 11:50 AM